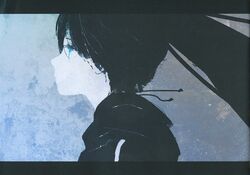 Due the song being based off of an original character not from Supercell, the meaning behind the song is based of huke's, the creator of B★RS, depiction of her. Black★Rock Shooter is a "person" within oneself, and was lost from the start of the song. She was nowhere to be found, and is in search of by the "narrator". Yet, as the song approaches the end of the song, the "narrator" realizes that B★RS had always been within herself. All she has to do is sing this song, and B★RS will be there too.