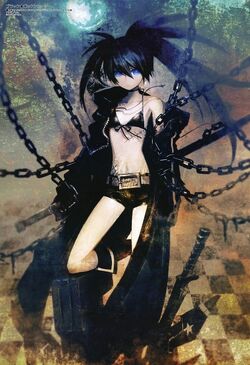 Black★Rock Shooter is depicted as a lonesome girl from the "Otherworld", the main setting of most of huke's artworks. She wields a large canon-like gun, the ★Rock Cannon, and a katana named Black Blade. She has had many kinds of roles as the main protagonist in many projects based on her. Her background is otherwise vague.

Black★Rock Shooter's original concept is a pale-skinned, blue-eyed girl with black hair in an uneven twitail hair style(her right lock of hair is shorter than her left). She bears two smal scars on her midriffs, while her left eye blazes with a blue flame.

She wears on the top a black string-bikini under a black hooded jacket. The jacket is lined with white along the sleezes, while there is a small white star on the front of the jacket(left side), and a larger star on the back of it. She wears black gloves that goes just past the wrists of her hands. On the bottom, she wears a pair of tight-fitting shorts with a metal belt and black knee-high boots that are stripped with white.
The ★Rock Cannon she wields is her main combat weapon,

while the Black Blade is utilized when serious close-combat fighting is necessary. The ★Rock Cannon takes the form of a large and long-barreled gun, which in height goes up to B★RS's chin. As her name says, the Cannon fires rock-like projectiles, firing 20 rounds per second. Her Black Blade is a black-bladed straight-edge katana, and it's a weapon rarely used by B★RS due to the fact that her ★Rock Cannon can serve as a melee weapon also. (Black Rock Shooter's appearance is similar to Hatsune Miku's, but they have no relationships between each other.)

Physically, Black★Rock Shooter is a young girl who is at 163 centimeters tall, with her weight possibly being light-weighted. Her age range is mid-teen, most of the time 15 years of age.

Black★Rock Shooter's personality varies from project to project, but for the most part, she usually has a serious expression, with no other emotions, resulting with her having a poker-face.